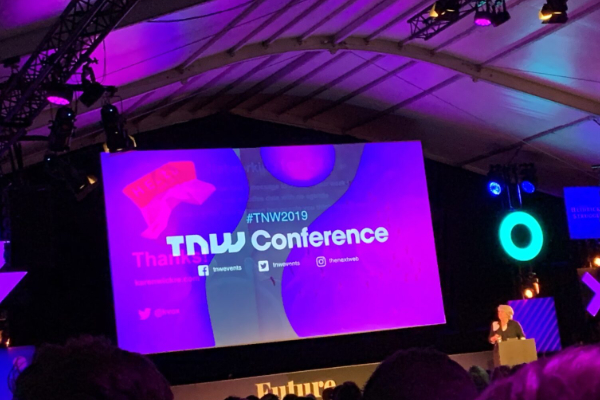 Music, the latest technologies, awesome speakers, a hype location… the best mix of a festival and a tech conference, and nothing like we had experienced before. The future of tech and everything surrounding it was discussed, workshopped and explored here.

But not only that, everybody who was anybody was there… including Hodor from Game of Thrones. You go ahead and check it out…

Yes, I’m talking about The Next Web. We were some of the luckiest 14.000 attendees that got to walk under the Amsterdam rain, following our preferred topics and speakers. It became a game to run from Venue 1 to Venue 8, and leave in the middle of the talk just so you could make it in time for the speaker on the Main Stage. We certainly made our steps.

Jokes aside, we enjoyed amazing stories, took a couple of new ideas on board, and learned a bit more about future technologies.

Oh, and we also had a couple of beers. Let me start from the beginning…

AND SO IT BEGINS

We had been preparing for this event for a long time (at least a week)-no, seriously, this time we took it with time-so we got to stay at the fancy Conscious Hotel in Westerpark, that we would use as our base for the 2-day event.

We decided to meet at 8:30h (always leaving room for the late-comers) at the hotel, from where we would cycle to NDSM (The Next Web location this year). What could go wrong cycling with 30 people in Amsterdam? Don’t worry, almost everyone got to the venue safe & sound.

After a short ferry ride, we headed to the Main Stage to check out the Grand Opening, and with a bit of luck (or lack of it), that was the last time you saw your colleagues for the rest of the day. It was expected though, given the different array of topics, speakers, and venues, that we would have to split up to go to the cool sessions we had in our calendar for the day (that’s if you could log-in in the event’s almost-working APP, no pun intended The Next Web tech gurus).

After a productive morning, some Starwarerers (new term) headed to Pllek for a tasty and cosy (crowded) lunch, while some others adventured to the cool-themed food-trucks.

Hours later, we gathered back at the hotel to freshen up and prepare for dinner and the corresponding drinks. These events are luckily only twice a year, folks.

We had another lovely walk in the rain to reach the restaurant. We had rented out boven-BAUT (that is, the upper floor of a trendy restaurant in Amsterdam west called BAUT).

Everything was set; the tables, the beamer, Marc and Roland (Starware CEOs for future references). We just needed to wait for the people to show up.

It didn’t take that long, and eventually, Marc and Roland started with their Facts&Figures presentation. We will skip this, as it may contain sensitive information. But it’s mainly the part where we are told that we are awesome and how we keep growing and doing great one more year.

Following the presentation, we had an amazing 3-course dinner with lots of wine and beer. We took the chance to talk with each other, change chairs a couple of times and have some good laughs.

A team that laughs together stays together!

After dinner, we took the party elsewhere. More precisely back to the hotel, where they considered we were having too much fun and they wanted to put an end to the night.

This resulted in one last drink, at least for some. The die-hards started the mission of finding the coolest bar within reach.

We did manage to get to some places before jumping into a taxi direction Rembrandtplein. We only had a small pitfall: we took a taxi meant for someone else, resulting in having to come back half way and had to wait for a new taxi to come. Under the rain. Oh well.

It was all worth the wait to see Roland’s face after 10 minutes at Tante Roosje (described as “a nostalgic dutch cafe”). The best dutch music of all time!

So we made our final stop of the night and dove into ESCAPE, where we conquered the dance floor (we’ll save you the details).

And a brand new event day ahead at The Next Web! Lots of coffee to make it through the day and great talks.

All and all, an outstanding couple of days to help us bond as a team, share experiences, learn from others, get new ideas and insights; and most importantly: remind us that we are a proud and strong team ready to take up the next challenge!

We use cookies on our website to give you the most relevant experience by remembering your preferences and repeat visits. By clicking “Accept”, you consent to the use of ALL the cookies.
Cookie settingsACCEPT
Manage consent

This website uses cookies to improve your experience while you navigate through the website. Out of these cookies, the cookies that are categorized as necessary are stored on your browser as they are essential for the working of basic functionalities of the website. We also use third-party cookies that help us analyze and understand how you use this website. These cookies will be stored in your browser only with your consent. You also have the option to opt-out of these cookies. But opting out of some of these cookies may have an effect on your browsing experience.
Necessary Always Enabled
Necessary cookies are absolutely essential for the website to function properly. This category only includes cookies that ensures basic functionalities and security features of the website. These cookies do not store any personal information.
Non-necessary
Any cookies that may not be particularly necessary for the website to function and is used specifically to collect user personal data via analytics, ads, other embedded contents are termed as non-necessary cookies. It is mandatory to procure user consent prior to running these cookies on your website.
SAVE & ACCEPT